Like all my prior books, the roots of Love and Freedom are deeply personal. It was in the late 1980s, while walking with my first steady girlfriend in the streets of Barcelona that the following question flashed into my mind: “Why does being in this relationship mean that I cannot love any other person on the planet in sensual or sexual ways?” Given that there are 7,800 million people in the world, that culturally prevalent mandate struck me as a delirium of cosmic proportions. This event was just the beginning of more than three decades of not only questioning the monocentric Myth of Romantic Love (“find The One and you will live happily ever after”), but also the exploration of alternative relational styles.

During this exploration, I lived long periods of both nonmonogamy and monogamy, as well as periods of sexually active singlehood and three years of highly erotic asexual–aromantic celibacy. Over this time, I realized three important things: First, a variety of personal and contextual factors (such as developmental pulls, healing needs, and sociopolitical circumstances) made the selection of one or another relational style as optimal. Second, being able to live both monogamy and nonmonogamy without serious conflicts or fears entailed the relational freedom to choose between them in alignment with the unfolding needs of individuals and couples. And third, I personally did not feel identified with—and actually felt oppressed by—these categories and the cultural pressure to have to identify myself as either monogamous or polyamorous. After repeated expositions of my transbinary relational style over the years, for example, some close friends still see me and describe me as polyamorous. The message is clear: If you are not monogamous, you must be polyamorous. And if you deviate from monogamy, the poly “Scarlet Letter” stays with you for life. In Love and Freedom, I reject this limiting either/or logic and invite readers to try both/and—or win/win—lenses. Thus, in addition to a caring commitment to nurturing the diversity of life’s nonharmful creative expressions, a personal sense of frustration animates this book’s efforts to think beyond the binary and bring forth relational spaces wherein, to put it bluntly, I (and perhaps many others) can feel more at home.

I gradually realized that in the same way that the transgender movement surmounted the gender binary, a parallel step can—and should—be taken with the relational style binary. In this book I offer the first systematic discussion of relationship modes beyond monogamy and polyamory: fluidity (oscillating movement between monogamy and nonmonogamy), hybridity (integration of the essential values of these relational styles), and transcendence (enaction of novel transbinary relational styles/selves). Moving beyond the mono/poly binary opens a novel and plural relational field that I have named novogamy.

Importantly, this book denounces the polyphobia and monophobia shaping the contemporary “mono–poly wars” (i.e., the predicament of mutual competition among monogamists and polyamorists). Polyphobia is the conscious or unconscious fear, disgust, pathologizing, moral judgment, religious condemnation, or spiritual condescension toward nonmonogamy. I became personally (and painfully) aware of polyphobia many years ago when a student of a graduate university where I was teaching in San Francisco, California, confessed to me that she never attended my classes because she had heard about my then-nonmonogamous lifestyle. As she was an international student from South Asia, I sympathetically situated her decision in a cultural context and did not confront her—but imagine someone telling you that they did not enroll in your classes because you were gay, female, transgender, or from Bangladesh. Furthermore, like homophobia, polyphobia can be internalized and lead to feelings of inadequacy and self-loathing—or the painful sense that there must be “something wrong” with oneself if one desires to romantically or sexually love more than one person or is incapable of sustaining long-term monogamous bonds. However, this is only half the story: In part as a reaction to polyphobia, many poly people also characterize monogamy as unnatural, hypocritical, patriarchal, or morally and spiritually bankrupt. Monophobia can also be internalized by people who have adopted poly values, for example in the form of subtle to harsh self-criticism for not being able to romantically love more than one person, hold simultaneous sexual–affective relationships, or experience compersion (i.e., sympathetic joy at one’s partner being loved by others) instead of jealousy. Seeking to put an end to these pointless “mono–poly wars,” in this book I show that both polyphobia and monophobia are ideological stances that are not supported by the available empirical evidence.

Although scholarly in nature, Love and Freedom is animated by a practical thrust. I have too frequently witnessed bitterness, distress, depression, and even existential anguish in people who were thriving in their lives, but whose intimate bonds were lacking or disappointing. Conversely, I have consistently observed how many people with serious professional, economic, or personal challenges, but fulfilling intimate lives, both appear and report being fundamentally happy. This book aims to radically open the range of legitimate relational choices we can make throughout our lives—not only beyond socially enforced monogamy, but also beyond the apparently compulsory choice between monogamy and polyamory or nonmonogamy. Understanding the emerging relational options of our times—as well as the forces conditioning them—can also counter the confusion and inadequacy many face today in the wake of repeated relationship “failures,” clandestine affairs, or decreased sexual desire toward their partners. My hope is that this work empowers people to live freer, more vital and creative, and ultimately more fulfilling relationships in which deeper and wider forms of love can flourish on Earth without unnecessary constraints.

Lastly, readers will learn practical tools to not only transform jealousy, but also enhance their relational freedom, while being aware of key issues of diversity and social justice. They will also learn novel standards to evaluate the success of their intimate relationships and a new referent of masculinity (beyond the Alpha male) called the Omega Man, as well as be introduced to a transformed vision of romantic love beyond both monocentrism and emerging polynormativities.

This article quotes from my forthcoming book, Love and Freedom: Transcending Monogamy and Polyamory, which can be pre-ordered at Love and Freedom
You can access a special 30% discount offer by ordering with the discount code below: 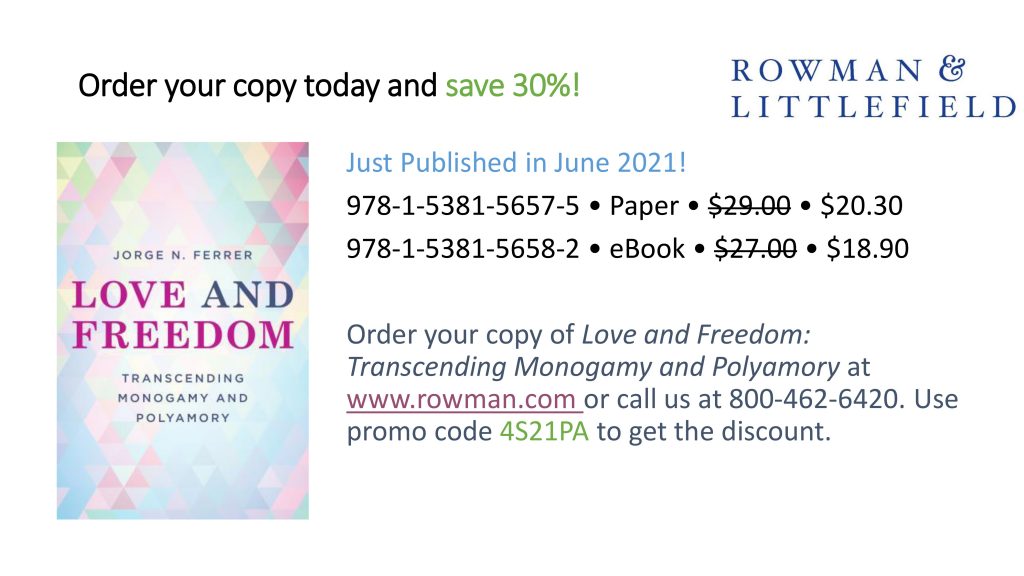 Jorge Ferrer Member since June 21, 2021
Loading + Follow Following
Jorge N. Ferrer, Ph.D. is an author, relationship counselor, and educator. He was a professor of psychology for more than 20 years at California Institute of Integral Studies, San Francisco, where he also served as chair of the Department of East–West Psychology. He has published several books and dozens of articles on psychology, education, and religious studies, and his work on intimate relationships has been featured in journals such as Sexuality and Culture and Psychology and Sexuality. In addition to Love and Freedom, Jorge authored Revisioning Transpersonal Theory and Participation and the Mystery, as well as coedited The Participatory Turn. In his international private practice, Jorge offers professional counseling focused on the management of jealousy, infidelities, sexual incompatibilities, open relationships, and the design of more satisfying intimate relationships. He was selected to become an advisor to the organization Religions for Peace at the United Nations. Learn more at www.jorgenferrer.com. https://thefield.aleftrust.org/my-profile/jorge-ferrer
Do you like Jorge Ferrer's articles? Follow on social!
Contributor