The pictures were painted directly through me, without any preliminary drawings, and with great force. I had no idea what the paintings were supposed to depict; nevertheless I worked swiftly and surely, without changing a single brush stroke. Hilma af Klint

The groundbreaking art of Hilma af Klint was the result of aesthetic alchemy. In her artworks, we find the integration of two practices: painting and spiritualist séance involving direct contact with Masters and spirits. Hilma af Klint was born in 1862 in Sweden to a navy family and began painting as a child. After she graduated from the Royal Swedish Academy, she made a living as a commercial landscape and portraiture artist. Her younger sister’s death in 1880 intensified her lifelong interest in spiritualism. Consequently, she joined the Theosophical Society and the Anthroposophical Society, which were popular in the late 19th century and early 20th century.

Hilma af Klint’s transition to painting guided by spirits started to mature in her mid-thirties during séances with four other women. Calling themselves, The Five, they developed methods for receiving knowledge from the astral plane and the akashic records. At the age of 43, Hilma af Kint received the Great Commission from Guru Amaliel, one of her spirit guides. The work transpired from 1905 to 1915 and resulted in the series Paintings for the Temple. Altarpieces is a triptych that represents the culmination of that creative and spiritual process.

After she died in 1944, her nephew and family members kept her body of works away from the art world. Recently, Hilma af Kint has risen from almost total obscurity to wide mainstream popularity. Halina Dyrschka, the producer and director of the documentary film Beyond the Visible – Hilma af Klint (2019) says that Hilma af Klint was not simply forgotten by art historians and curators but ignored. Even the Solomon R. Guggenheim Museum initially bypassed a proposal for an exhibition of her paintings. Dyrschka states that the people of the world were the first to embrace, adore and acknowledge Hilma af Klint’s art. Other cultural forces, the art establishment and academia, accepted Hilma af Klint only after the people chose her.

Paintings for the Future turned out to be the most successful exhibition in the history of The Guggenheim, attracting over 600,000 visitors. The oeuvre raises significant questions such as: Why do Hilma af Klint’s paintings affect us so deeply at this day and age? Does the fact that she painted in a state of trance contribute to the innovative style and aesthetics?

When I entered the exhibition, Hilma af Klint’s paintings were calling me to commune with them. They generated an alchemical process in my psyche that opened a portal in my consciousness. An imaginary temple transpired where a mysterious entity seemed to mediate between me and the artworks. Hilma af Klint believed that a contemplative viewing of her paintings could awaken knowledge and truth buried in the subconscious mind. My encounter with her paintings left me with an impression that exceeds beyond that visit. In her temple of art, I bowed with humility before a universe that spurs awe. A mysterious universe of paint and spirit incites my desire to learn from it about the future evolution of humanity, and the combined potential of art and spirituality. 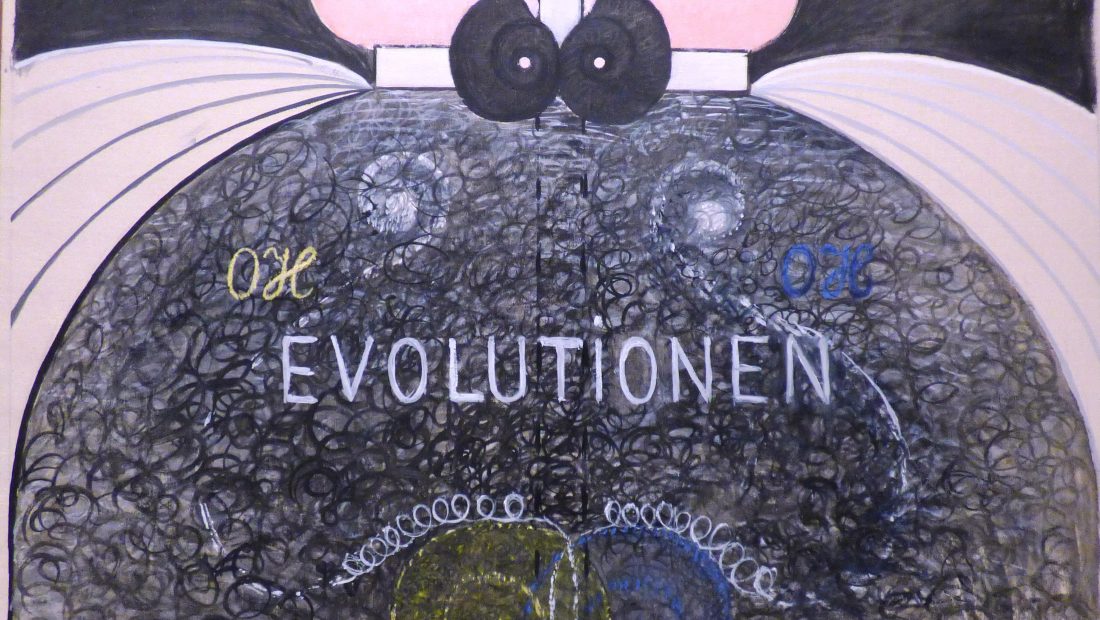 Such personal and subjective encounters with art can have a therapeutic value, especially as the effects of COVID-19 on our life challenge us daily. As part of my talk on Art as a Planetary Garden in the Corona & Beyond series, I presented a video meditation inspired by Hilma af Klint’s Altarpieces. These paintings stand for universal spiritual principles that together convey a sense of balance. At the central picture, she drew a magical talisman that captures the consciousness of the viewers and takes them on a spiritual voyage beyond the veil of appearances.  Altarpieces represents the harmonious flow of matter and spirit on Earth, the cosmos, and in each one of us.

Art and the Resurgence of Humanity

Now more than ever, we need to regenerate and redesign our life on Earth in balanced ways.  Art, with its symbolic, metaphoric and mythic language, can assist us in our resurgence as a species. Moreover, Halina Dyrschka stresses that Hilma af Klint’s art reminds us to ask the most burning questions: What are we doing on this planet? How do we want to live here on Earth? Contemplation of her art presents an opportunity to personally and collectively examine our existence in order to begin envisioning a new cycle of evolution.  Therefore, I am looking forward to reflecting on Hilma af Klint’s artworks with my students.

Beyond the Visible – Hilma af Klint is released for cinema on the 9th October 2020 in the UK and Ireland , alongside a programme of online events and digital screenings.

Lila Moore Member since August 28, 2020
Loading + Follow Following
Lila Moore, PhD is a lecturer, theorist, film-maker, screen-dance-maker and mixed reality artist. She holds a practice-based PhD in Dance on Screen from Middlesex University (2001, UK) in the context of modern and contemporary art, experimental film, screen-dance and performance with special reference to ritual, myth, and expressive arts. She also holds an MA degree in Independent Film and Video from Central Saint Martins College of Art & Design, London. She is an expert in the leading edge field of Technoetic Arts, and the Cybernetic Futures Institute is based on her postdoc at the Planetary Collegium of Plymouth University, 2015. Lila lectures and writes on film, art, screen dance, digital culture and new technologies in the context of modern and contemporary spiritualities, mysticism, Jungian and transpersonal psychology and studies . She is a lecturer and dissertation supervisor at the Alef Trust. Additionally, she has been a lecturer at the Department for the Study of Mysticism and Spirituality at Zefat Academic College. She regularly participates in juried exhibitions, academic conferences, and her articles were published in academic journals. Lila Moore’s digital artworks and theoretical writings are archived by ACM SIGGRAPH and ADA-Archive of Digital Art. Websites: https://www.cyberneticinstitute.com https://www.cyberneticfutures.com https://thefield.aleftrust.org/my-profile/lila-moore
Contributor

Leave a comment
Comments to: Hilma af Klint – Pioneer of the Spiritual in Art
Cancel reply