There’s a sequence in David Attenborough’s insect series, Life in the Undergrowth, when he describes the annual life cycle of the bumble bee. The story of the queen bee founding her nest after hibernation, raising a whole society, producing new queens and finally succumbing to senescence can only be described as high drama. This was the initial inspiration for my aliens, the humbles, who appear in my new Science Fiction novel, Emerald to Ice.

Around the same time, I watched the 2011 Starmus talk of astronomer and Queen lead guitarist Brian May. May was worried about the current state of humanity, and the implications for any expansion into space. “Suppose we find that intelligent life that we’re so excited about looking for,” he asked, “suppose we bump into it out there? How will we treat it? How will we behave?”

In the 1960s, at the height of the Vietnam War, Ursula Le Guin wrote The World For World is Forest, in part a parable of the US presence in Southeast Asia. In the book, humans arrive on an alien world, strip the forests, enslave the indigenous people. A similar story is told in the 2009 film Avatar. In both works, human beings are shown as basically exploitative.

I wanted Emerald to Ice to express something different. In the book, two distinct but allied human factions have arrived at the edge of a star system about a thousand light-years distant from Earth. The humbles live on one of the planets in the system. The humans have avoided contact for eighty years, but are then forced to break planetary quarantine.

Both human factions are significantly more enlightened than those we met in the earlier works. They’re well versed in postcolonial studies and are eager not to repeat the grim history of first-contact on Earth. But despite their benign intentions, will they manage to avoid destructive consequences? 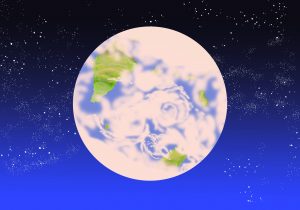 Abode, the name of one of the human settlements, was deliberately written as utopian. It’s a society where economic and social justice has by and large been achieved. Sexism, racism and homophobia are history. Governance is via sortition. Work is democratic. Diverse religions and secularisms co-exist peaceably. Crime, especially violent crime, is rare and policing is done by community volunteers. Abode is de-militarised and mostly disarmed.

Humans in the 21st century seem to me in a comparable situation. Today, the bulk of humanity lives increasingly urbanised lives, mediated by electronics, extensively surveilled and walled off from the natural world. The resulting culture seems to me increasingly inward-looking, fractious, narcissistic. An exclusively human-centred outlook has become curdled, even toxic.

I believe that this would hold true even if we achieved the sort of just, utopian conditions that are yearned for in so much progressive thought. The exclusion of the more-than-human world can only result in a fatal impoverishment of human consciousness, a sort of critical myopia. The price paid is a lack of real empathy for other beings, even those one ostensibly wants to protect. And in my novel, this plays out as an initial failure to take the alien’s perspective.

Ursula Le Guin was critical of much science fiction that simply affirmed the anthropocentric attitude. She contrasted this with fantasy at its best. The “green country of fantasy,” Le Guin suggested, “verges on and partakes of actual realms in which humanity is not lord and master, is not central, is not even important.”

The shock of first contact, for humans, is the understanding that we are not the be all and end all in the universe. This is an experience that we can have on planet Earth, right now. In the Immense Journey, Loren Eiseley suggested that “One does not meet oneself until one catches the reflection from an eye other than human.” I felt this very much in 2018, when seeing pilot whales at close quarters off Tenerife. The encounter with other intelligences provides necessary perspective.

My humbles have little interest in human beings. Having a different evolutionary heritage, their strengths and weakness differ from ours. Their preoccupations are not our preoccupations. In a way, they’re emissaries, fictional representatives of the non-human intelligences that on this planet we ignore, exploit, kill on a daily basis.

The humbles, and their beautiful but often hostile world, open doorways of consciousness for my protagonist that help her understand just how small human life has become. This results in a transformed experience of the world, and an understanding that humans are not, and have never been alone. This is perhaps a lesson that 21st century humans need to learn, while there’s still time.

Emerald to Ice is available from Amazon UK, Amazon US and other Amazon sites.

Matt Colborn Member since November 8, 2021
Loading + Follow Following
Matt holds an MSc. with Distinction in cognitive science from the University of Birmingham and a D.Phil in biology from the University of Sussex. His first published fiction appeared in Interzone magazine in 2001, and his novella Emerald to Ice was published in October 2021. https://thefield.aleftrust.org/my-profile/matt-colborn
Contributor